The Last 'Battle' on English Soil, The Jacobite Rebellion of 1745.

This can hardly be counted as a piece if investigation work, more an information account that people from North of the Border or indeed, further south of Penrith in England (which is basically everywhere) may be unaware of. This revolves around the Jacobite Rising and the march south to take the English Crown By Charles Stuart (Bonnie Prince Charlie). They got as far as Derby but were then put into retreat and the final 'Battle' or skirmish took Place at Clifton. This is not intended to read as a history lesson as I am the wrong one to give it, however, it is a point of interest that most people travelling to Ullswater/Pooley Bridge via the M6 miss, yet they are only about a mile from it.

Saint Cuthbert's Church contains a memorial to the English Troopers who died and it is just through the gate and to the right.

Moving further south into the village (which basically straddles the old A6) you now come upon the next point of interest which locates the 'battle'. 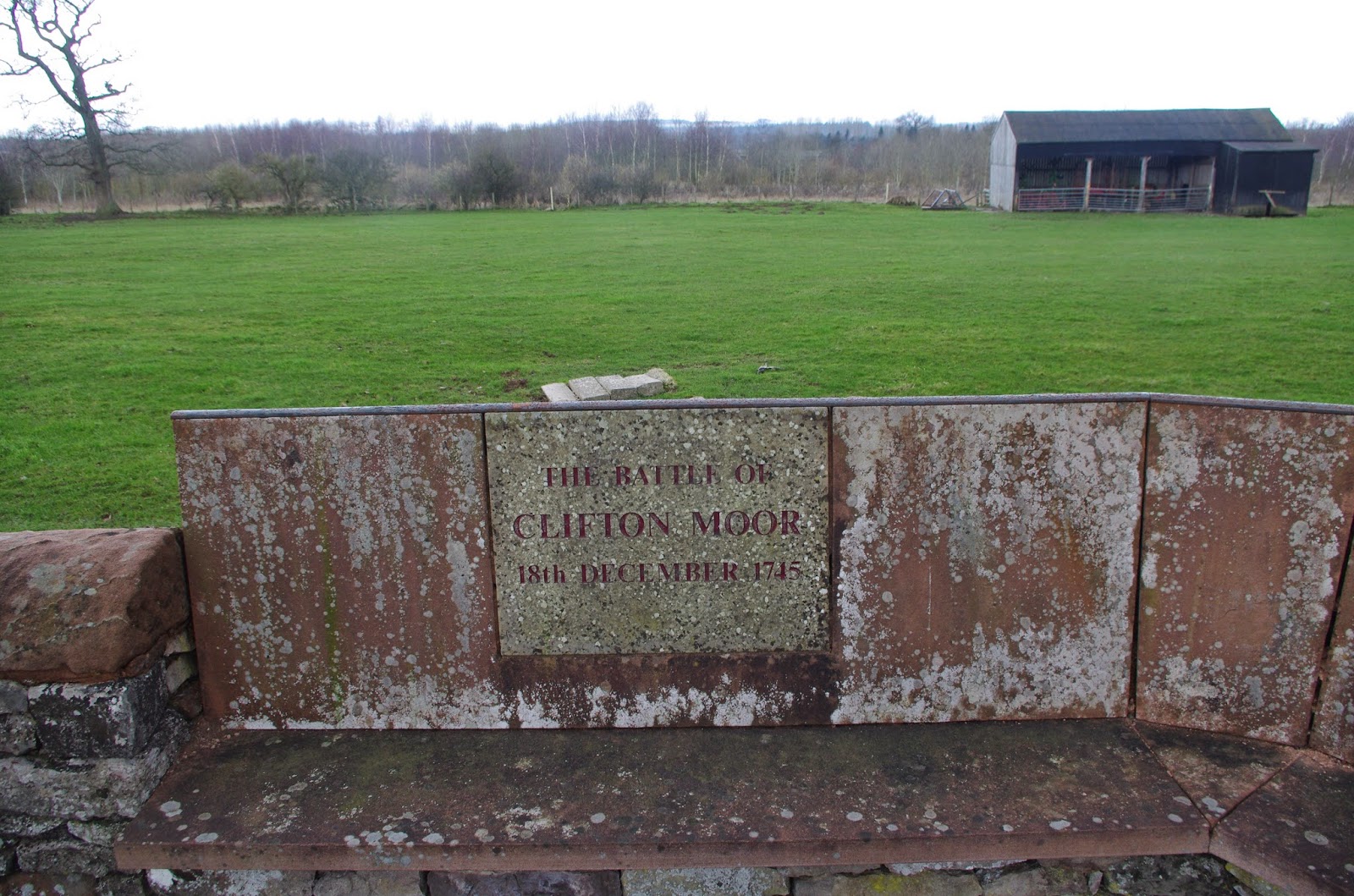 Heading just further south in the village if you take the track to the left just past The George and Dragon Inn, you come across the Rebels Tree.

Note above the flag of St. Andrew. Reputed to be buried here are 12 Jacobite soldiers who fell in the 'battle' or skirmish. This battle is also referred to in Walter Scott's Waverley historical novel at Chapter Fourteen, 'A Journey To London'.


This last battle is also reputed to be the original source of the lament The Bonnie Banks of Loch Lomond, the rest of the Jacobites being incarcerated at Carlisle Castle.
For those heading south from Pooley Bridge, it is merely a question of turning right onto the A6 and heading for ther Shap junction 39, just as easy as heading for junction 40; for those heading north, it is only a mile diversion to take in this piece of national history.


(C)opyright
Posted by Lakeland Tales at 13:39 No comments:

Despite my many years of walking the Cumbrian Fells I have never been an ardent 'Wainwright bagger', these being the 214 fells walked by this iconic individual and which range in height from Scafell Pike, the highest at 978m, to Castle Crag, the lowest at 298m. As I began to assist friends to complete the Wainwright Fells, the journey took me onto smaller fells which turned out to be real gems for their views. Two such fells are Fellbarrow (416m) and Low Fell (423m), the latter giving spectacular views of The full length of the Crummock and Buttermere valley and also looks down onto Loweswater. It is my usual practice to pick up folklore or local tales of the areas I walk. I do not recall just how |I became aware of this 'mystery' associated with Loweswater though someone said it was also mentioned in Wainwright's books.The actual walk I leave for another article one day soon, though I write this to explain  'The Crabtree Beck Tragedy' referred to by Mr Wainwright, albeit in little detail.

I began by checking the internet which showed only two sources of information:

a) The Old Cumbria Gazetteer (listed as hearsay, being a verbal account):

There was a dam across the beck to supply water to a lead mine in Kirkhill Wood. Edward Bogg, in 1902, told of a dam burst:-

'Many years ago a small reservoir, or tarn, on the hill above the lake [Loweswater], burst, and came rolling in one huge wave towards the lake; a farm stood in its path, and one of the occupants, a girl who was outside the house, saw the dark mass of water sweeping downwards. Darting into the house, she informed the inmates (the master and a female) of the occurrence. These two had just reached the outside of the door in their endeavour to escape, when the wave caught them both, swept them into the lake, and their bodies were never discovered, while strange to say, the girl, who was first to discover the inundation, was saved by the water forcibly banging the door in her face and holding her prisoner, when she was in the act of following the other persons'.

It is not clear that the right beck and house are identified.

b)  An Atlas of The English Lakes (Author) John Parker:

'..... A hundred years ago a tragedy occurred when Crabtree Beck, swollen by the waters of a burst dam on Loweswater Fell, swept the bodies of an occupant and his child out of the eponymous house into the lake'.

There is no clear reference to any names, dates, e.t.c. and this appears to be folklore or at least lost, except by verbal retelling and even here, the tale alters.

I had in the meantime visited the specific area and took the below photographs of the house named Crabtree Beck, with the namesake beck running down it's outer wall.

This is the house by that name and the beck runs down the right with the fence to protect pedestrians from a mishap.

I decided to try and find out whether this actually occurred and thought a good point of contact would be the Lorton & Derwent Fells Local History Society and managed to contact a lady who is the society secretary. She was unable to give me any direct help but through another member she managed to send me an e-copy of John Askew's 'A Guide To The Interesting Places In And Around Cockermouth' (Published 1866) This was invaluable as it at least gave a period of time, summer 1828 and a name of the dead man, John Tyrrel; which seemed to at least indicate it was more than local legend. The secretary warned me that the name was not John but Joseph (this becomes relevant later).
From here I visited the Graveyard of St. Bartholomew's Church at Loweswater village, in a hunt for the graves, noting that The Old Cumbria Gazetteer stated the bodies were never discovered. I found none, though in my experience of such tragedies I found it difficult to accept neither body was ever recovered from such a small lake.
From here I visited Carlisle Archives and with the assistance of the staff and after fruitlessly checking microfilm of county papers of the time, I finally checked the records: Burials in the Parish of Loweswater For the year 1828 and there it was:

The second entry is his son 'John' and his age is listed as 2(years) though note the burial is on 29th and not with his father on 26th.

Now sense shows this to be an actual event and not folklore, though corrections can now be made. It was a father and son, not both occupants and the bodies would at some time have been recovered; these are burial records and clearly not the dates of their deaths. The secretary had been right and wrong for it was both Joseph and John who died.

Although nearly there I decided to carry on to find out the actual date of the incident and checks of the Archives records showed Inquest reports available at Whitehaven Archives and a later visit to that establishment revealed the inquest reports. I must say I was surprised and disappointed with what I viewed. Having some experience of a modern inquest I at least expected a file on the subject and steeled myself to a thin document. There were two inquests, both fitting on a single sheet of hand written paper with the signatures of the twelve jurors also present on each coroners report! A modern Coroners Court table would groan under the weight of a modern inquest file.

I will summarise the Inquest of Joseph:

'The liberty of the Lordship of Egremont in the County of Cumberland....
An Inquisition indented taken at the dwelling of Sarah Turrell situate at Crab Tree Beck in the Parish of Saint Bees ...
Friday Twenty Fifth of July ...
Before William Bragg Gentleman Coroner ....
Upon view of the body of Joseph Turrell then and there lying dead upon the oath of Aaron ....

...... 13th day of July aforesaid at Crabtree Beck aforesaid was by the sudden bursting of as reservoir kept and adapted for the purpose of carrying the pumps and then belonging to a certain lead mine worked and carried on at Loweswater within the liberty aforesaid, swept and carried away by the flood or water accumulating from the bursting of the said Reservoir and was then and there suffocated and drowning and is the Jurors aforesaid upon their oath aforesaid do say that the said Joseph Turrell accidentally casually (or casualty) and by misfortune came by his death in the manner aforesaid and not otherwise.

John's inquest was a few days later and the same verdict of accidental death, though the Inquest has his age as '18 months or thereabouts'.

There we have it; a father and son swept away into a lake by a burst dam washing through their house. It occurred on 13th July 1828, there corpses were recovered at different dates and they were buried at different dates also. The mother Sarah Turrell was not injured but she lost both her husband and child and the verdict was accidental death. I believe a modern inquest would return a verdict of Unlawful killing, but times change especially in respect of safety as opposed to profit and there was no Health and Safety Legislation to be flouted in 1828.

The dam was built to feed the mines need for a water wheel to raise the ore and it was based in the region of Moss Cottage, this house being the original mine headquarters (map reference NY146216) and it is thought the stream at the cottage is the lower part of the leat that brought the water from the dam.

With reference to the rainfall the only checks I have been able to conduct show 1828 to be classified as a wet year. It may be that just down the valley from the wettest place in England that this was the influence, but it is too broad to conclude anything from, but one can wonder.

There is now no clear marking of the original dam yet the line of trees above seem just below the flatter area and one would assume the area of the dam. This can give a good route off the fell and skirt back to Thackthwaite along the wall line at the base of the fell.

This is a sad loss of life and a tragedy for the surviving mother/wife. Rather than be forgotten perhaps in remembering them in this way, it at least pays some tribute to them and the hard and precarious life lived in those days of the early 1800's.


**I have previously published this account, and other new material, for public knowledge. I did so in the expectation that anyone wishing to further expand that public knowledge would do so by highlighting this original account, and then adding new information they discover themselves. Sadly I am aware of one site that has repeated a large section of an account of another all but forgotten lakeland memorial to two boys that drowned and making out it was new, despite his following my many new lakes history accounts. I was asked by a person writing a book for Wasdale MRT for the generation of funds to assist that worthy cause. I gladly agreed to its use and he stated he would reference my original account. Such a stance by the latter is an honourable one; I hope the former person reflects on his conduct and no longer copies my work and then makes out he has found a new lakes history; that is dishonourable and diminishes him.**
(C)opyright