Heaven in Lakeland and Hell on the North Sea.

Heaven in Lakeland
The Lake District has long been renowned for it's natural beauty though for a real sense of it's splendour this normally means an arduous walk to the higher peaks such as Great Gable with it's panoramic views of Wasdale, Ennerdale, Buttermere and through to The Langdale Valley. Occasionally you can get a sense of that Splendour from some smaller fells, Hallin Fell being one of the finer examples and to drive down the eastern side of the lake, past the famous Sharrow Bay Hotel and up the hause to St Peter's Church, Martindale where you can park your vehicle, or on the roadside under the fell.

The beauty of this fell is the stunning and panoramic view one gets as the lake arcs round it's northern edge, coupled with the iconic Roman High Street ridge stretching from Penrith to Ambleside.


For those who wish to extend their walk or don't feel the top is for them, there is the more gradual anti-clockwise walk around the fell, from St. Peter's church.

As one skirts round the lake you begin to get the northern view over to Gallowbarrow bay and it was along this northern shore that Wordsworth and his sister Dorothy walked, she penning the walk in her journal and he writing his famous daffodils poem some years later, based on Dorothy's entry at the time.

While on this walk you cannot help but see the steamer making it's seemingly endless shuttle up and down Ullswater's full length, England's second largest lake. This lake trip is well worth the purchase of the ticket and can be a return route for a lake walk.
As the title describes this is a heavenly trip out to revitalise a soul.

Hell on the North Sea.
HMS Glorious was a First World War Courageous Class Battle Cruiser which was converted in 1920's to an aircraft carrier

Above is the window and I have included a bigger photograph showing the dedication at the base.

The window has a plaque of explanation next to it that reads:

'This window is dedicated to St. Nicholas a fourth century Bishop of Smyrna who is patron saint of sailors and children. It is in memory of the officers and men of the aircraft carrier HMS GLORIOUS sank in Norwegian waters in 1940. The ship lie s along the length of the window, cleaving the seas with the stars of heaven above. Amidships is the badge of The Glorious and above it the Pheonix bird which renews itself perpetually in the flames, a symbol of Resurrection. Beneath is the Anchor of Christian Hope, and the three bags of gold on the open book of The Gospel are the arms of St. Nicholas. At the foot the inscription.'

So if ever you are walking in this heavenly part of The Lakes, stop by the church and perhaps pay some respects to the men that faced that hellish naval barrage. They paid the ultimate price to allow you that freedom. The door is stiff, but should be open, don't forget to drop a donation in the church collection for that privilege.

The Parkin family have associations with Holy Cross Church, Berstead, Kent, and a window in that church shows St, Nicholas carrying an object; the object is the aircraft carrier HMS Glorious. 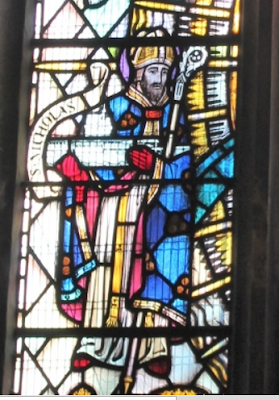 (C)opyright
Posted by Lakeland Tales at 19:11 No comments: