Most Lakeland walkers to Buttermere Valley will have at some time become aware of the white cross on Low Raven Crag, near the base of Fleetwith Pike. The cross becomes a draw to the curious who are interested in any marker of history in Lakeland.

Very little has been written however on the circumstances of how the tragedy happened, beyond she fell while carrying an alpenstock.
Fanny was born in the second quarter of 1869, in Rugby, Warwickshire, and was baptised on 28th July of that year. Her parents were Thomas, a painter by trade, and Anne (nee Shortridge). Fanny was the oldest of four children and her younger siblings in order were, Thomas (Tom), Mary Ann, and Mabel.
Fanny Mercer was in service to the Reverend P. Bowden Smith a master at Rugby School who resided at Barby Road, next to the school itself. The family and their three servants holidayed in the Lake District, stopping at Wood House on the shores of Crummock Water, the Bowden Smith's having holidayed there for five consecutive years. The servants were a Clara Tamer, Walter Clarke (the butler|) and 18 year old Fanny Mercer. To Fanny, it was an adventure for she had never been away from her native Rugby, and here she was in the beautiful and exotic valley of Buttermere; an adventure to savour and be thankful to her employer for the opportunity his employment afforded her.


After dinner on Thursday 8th September 1887, the three servants set off from Wood House and went by the Scarf Gap track to the top of Honister Crag, where the famous slate quarry is situated. They reached the summit about four p.m., and commenced their descent towards Gatesgarth by Raven, or Low Raven, Crag. Clara Tamer was leading, Walter was about six or seven yards behind, and Fanny was a few yards further at the rear. This placed her as highest on the ridge, and Clara lowest, Walter being between them. Fanny was going to get down to where Clara was standing, and took hold of her alpenstock close to the top. She leaped off the ledge on which she was standing, but instead of sliding her hands down the alpenstock she clung to the top, with the natural consequence that she was carried a considerable distance farther than she had anticipated. She jumped right over the Walter’s head, twisted round, and fell backwards a distance of 20 feet, striking with her head on a rock. She then rolled 130 feet down the steep mountain side. The instant Walter saw how his companion was jumping he caught hold of her dress to try to hold her. This was impossible, and a portion of the garment was torn off and left in his hand. A young man was working near to the place where she finally came to rest, and he went at once to her, but she was unconscious. Her companions went down and assisted to carry her to Gatesgarth, about a quarter of mile away; two of Bowden Smith's sons were passing and also  assisted. A mounted messenger was quickly sent to obtain the services of Dr. Forsyth at Cockermouth, about a dozen miles away. The Rev. S. Atlee of Buttermere and his guest the Rev. T.T. Smith, who had some surgical skill through his North American missionary work, attended in a carriage from The Victoria(now known as The Bridge) Hotel, Buttermere. They did all that could be done, but she died after about four hours, and before the doctor's arrival. The back of her head was terribly injured, but her face was only slightly bruised and no other bones were broken.
The next day an inquest was held by the Deputy Coroner of Cockermouth, Mr. John Simpson, at Gatesgarth. Rev. Bowden Smith identified the body and said he had last seen her alive at 9am on the Thursday. He had been on the lake when he heard of the accident and had then immediately made his way to Gatesgarth Farm. After the above circumstances had been given to the inquest, the jury, with the Farmer Mr. Rudd acting as the jury foreman, returned a verdict of Accidental Death.

On Monday 12th, the body was transported to Keswick for departure on 4:12pm train, and returned to her native Rugby.


The funeral took place in the Rugby Cemetery on the afternoon of Wednesday 14th, in the presence of a large concourse of sympathising spectators, the burial service being read by the Rev. J. Murray. Some of the deceased’s fellow servants acted as pall-bearers, and others followed with the mourners. Among the floral tributes were beautiful wreaths from Mrs. Bowden-Smith and family.

In time a cross was erected by her friends to commemorate her passing. 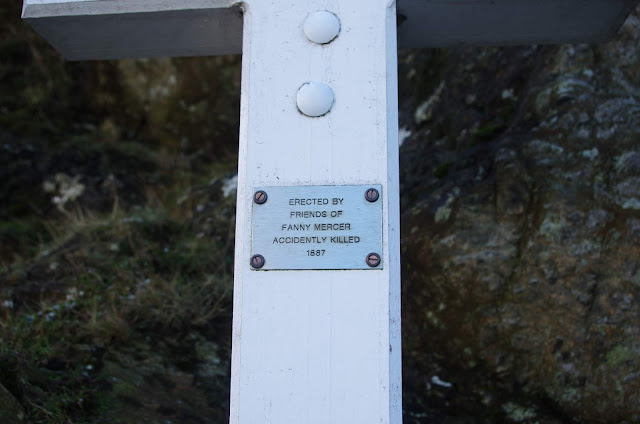 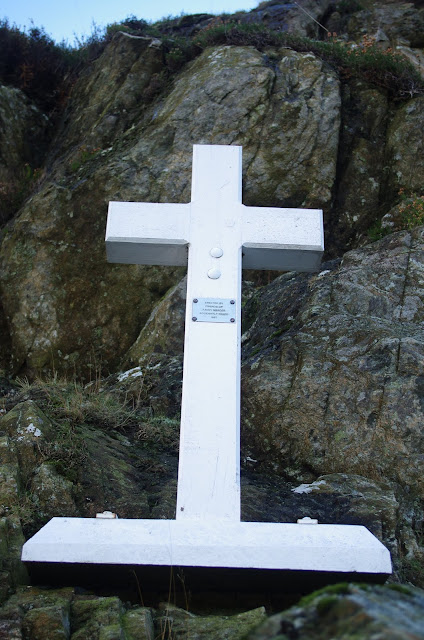 For such a young ordinary working class family member, the memorial cross would become one of the most well known markers of tragedy in the English lakes, forever memorialising the name of the young girl and anchoring her name in Buttermere.

For the Mercer family, Tom became a teacher of music, specialising in the violin and Cello, and married a Swiss lady called Bertha Niggeler; they had three daughters. Mabel was a dressmaker and died a spinster in 1943 aged 67 years. Mary Ann married a watchmaker called William George Steele and they had three daughters. Tragically another death occurred for the Mercer family with the passing of Mary Ann, aged 37 years, only a year after the last child, Hilda Eileen, was born. This last child appeared to be too much for William George to care for and she appears to have been raised by her Mercer grandparents. Both lived to a good age, Ann dying aged 80 in 1930 and Thomas 5 years later aged 90.